Passing through the in-line resonance

It stands as the benchmark: Those who operate with thermowell strength calculations in accordance with the globally recognised standard ASME PTC 19.3, will protect themselves against all eventualities.

With the additional mark of “TW-2016”, the standard specifications are now available in a revised version. The revision provides some clearer and more-detailed definitions.

42 years ago, the American Society of Mechanical Engineers (ASME) published a new standard for temperature measurement – PTC (Performance Test Code) 19.3-1974. The provisions that it contained for the wake frequency calculation were based on J. W. Murdock‘s fundamentals from 1959.

This standard remained unchanged for more than 20 years. In 1995 there was a serious accident at the Japanese nuclear power plant in Monju. It was caused by the rupture of a thermowell due to turbulence: The vibration direction of the tube was parallel to the flow direction of the medium in the pipe. Such an in-line resonance was not consideredin the original calculation basis from 1974. This edition of the standard only considered the more frequently occurring vibrations at right angles to the flow direction.

As a consequence of the Monju incident, the ASME standard from 1974 was completely revised and the result was published in 2010. Its most important improvement in comparison to the original issue – apart from a variable Strouhal number – was the inclusion of the in-line resonance (which had become the problem in Monju) in the calculation. Since then, ASME PTC 19.3 TW-2010 has been applied successfully worldwide in all industries whose processes are subject to high loads such as those arising from high flow rates. This applies, for example, to companies in the oil, gas and chemical industries.

Now ASME PTC 19.3 TW-2016 – an updated version – is available. The amendments contained within it relate to the following aspects:

Requirements for passing through the in-line resonance

In chapter 6-8.5 the requirements for passing through the in-line resonance with a ratio of the Strouhal or excitation frequency to natural frequency fs/fn = 0.5 are more clearly defined.

As a result, passing through the in-line resonance is possible, if the process medium is gaseous and the range of the in-line resonance does not fall within the continuous operation of the plant. As expected passing through this in-line resonance is the responsibility of the plant owner. Here, the permissible flexural fatigue stress must not be exceeded during the cumulative number of vibrations of 1011 cycles. How this translates into figures is shown in the following table. The calculations refer to a solid-machined thermowell from stainless steel with a tapered stem, 25/19 mm diameter and 6.6 mm bore. 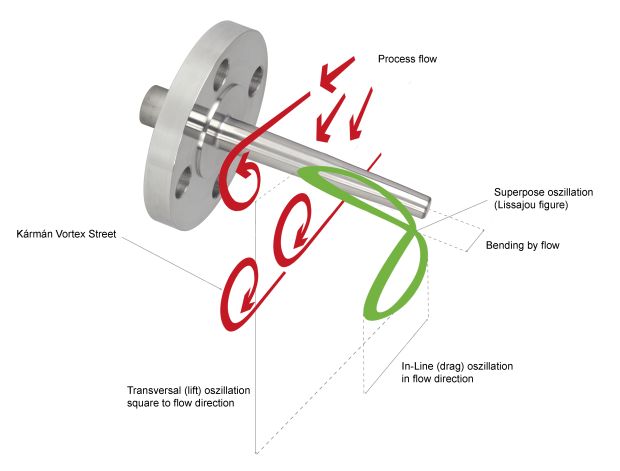 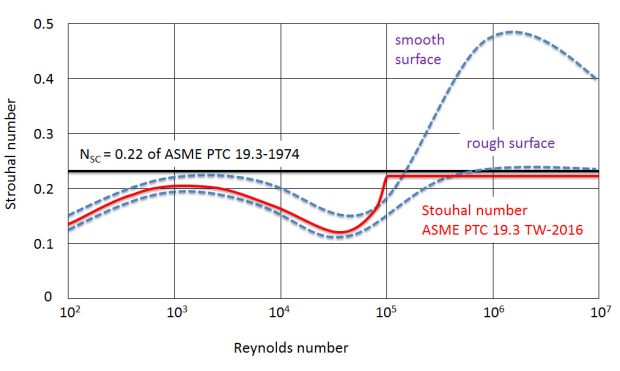 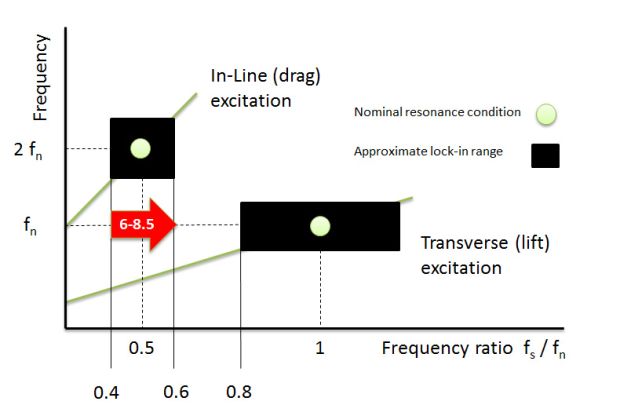 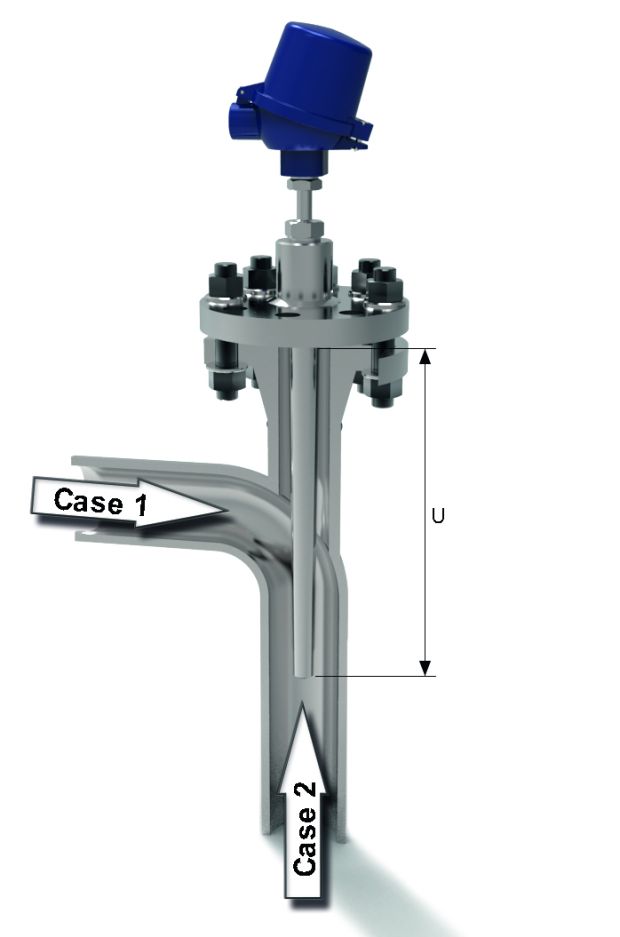 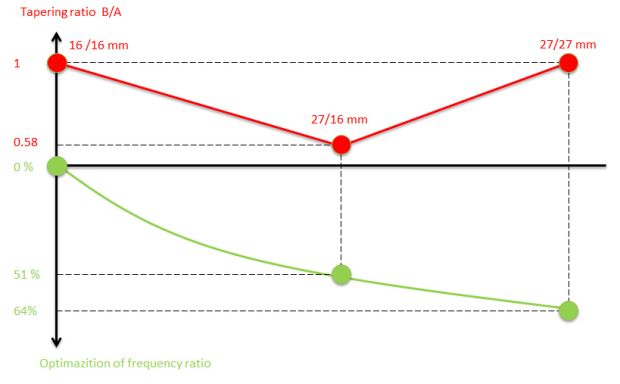 Furthermore, the process medium must not adversely affect the fatigue strength of the thermowell material. For the case, which cannot be completely eliminated, of a thermowell rupture resulting from in-line resonance, the standard demands safety provisions to prevent severe injury to personnel or damage to the plant.

With the mounting of thermowells in pipe elbows, “TW-2016” distinguishes between two fundamental cases: In case 1, the thermowell tip points in the direction of the flow. This installation is calculated as if the thermowell is subjected to flow along its entire insertion length (L). In case 2, the thermowell is subjected to a flow from its tip; a position which is preferable for many applications. Here, the calculation is also carried out over the entire insertion length, however, the calculation of the static bending moment is outside of the scope of ASME PTC 19.3 TW-2016. In this case, the determination of the bending moment and the Strouhal number should be made on the basis of computational fluid dynamics (CFD) or experimental measurements.

For an angled installation of a thermowell into the pipeline, the standard has been expanded by a chapter (6-10.8). With the calculation, the direction of flow does not matter – the thermowell will be designed in accordance with a conservative method,  as though it was installed perpendicular to the process flow.

Requirements for the minimum tip thickness of the stem

The tip thickness of the stem (t) within the dimensional limits in accordance with ASME PTC 19.3 TW-2016 has now been defined as at least 3.0 mm (chapter 4.1). This change has enormous relevance, primarily for the optimisation of the thermowell in the event of a failed calculation. The requirements contained in “TW-2010” state the tip thickness must at least correspond to the minimum wall thickness of the thermowell at the tip. This led to large problems in the everyday application.

To understand this, one must bear in mind which possibilities for optimising the thermowell design are actually PTC 19.3 conformant. Plant operators can either shorten the insertion length (L) or strengthen the root diameter (A) and the tip diameter (B) of the stem that is subjected to the flow. However, for these diameters and the taper ratio B/A resulting from it, the specifications of table 4-1-1 in chapter 4.1 set limits.

For example, the taper ration B/A must  be within 0.58 (= max. taper) and 1 (= straight stem). In practise however, these regulations are not without problems: Thus a strengthening of the root diameter is limited by the inner diameter of the flange nozzle. An increase in the tip diameter, on the other hand, has a negative effect on the response time of the thermometer.

The following diagram illustrates the effectiveness of a change of root and tip diameters with the example of a straight thermowell with a stem of 16 mm diameter: First the root diameter is increased to 27 mm (= max. taper). In the example case, this measure would improve the ratio of the Strouhal frequency to the natural frequency (fs/fn) by 51 %, without considerably diminishing the response time. An increase in the tip diameter, carried out in a second step, to 27 mm (= straight design) would yield an additional optimisation of the frequency ratio by 13 %, however at the price of a clearly longer response time.

Using the previous standard, its value would deteriorate further, since the tip thickness would accordingly have to be increased to 10 mm. In addition, the sensor length would need to be adapted to match the changed bore depth. In accordance with the current ASME PTC 19.3 TW-2016, however, the tip thickness could remain unchanged so long as its thickness is at least 3 mm.