Thermal storage will be another key technology in the future. Heating accounts for roughly half of European energy consumption. Besides the need to keep buildings warm, industrial processing is the other major factor in heat consumption. Innovative storage technologies hold the key to renewable energy utilization and energy-efficient industrial processing. Read on for an overview of the latest developments. 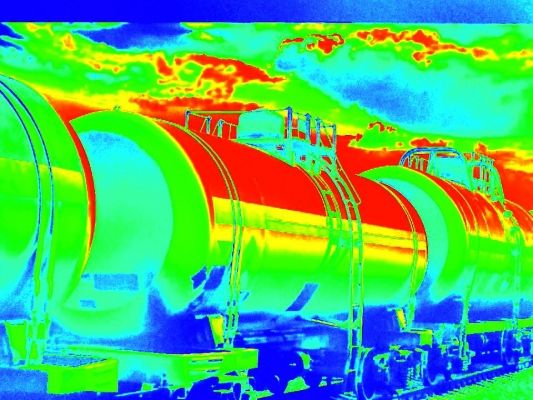 Whether heat is eventually delivered by tank car remains to be seen. The fact is that thermal storage systems are gaining importance (Picture: soleg - Fotolia.com / CHEMIE TECHNIK)

This 10 kW pilot plant is used to study different heat storage systems up to 400 °C. The thermal oil circulation right front is used to load and unload the storage. The storage tank will run on different storage media (Picture: DLR) 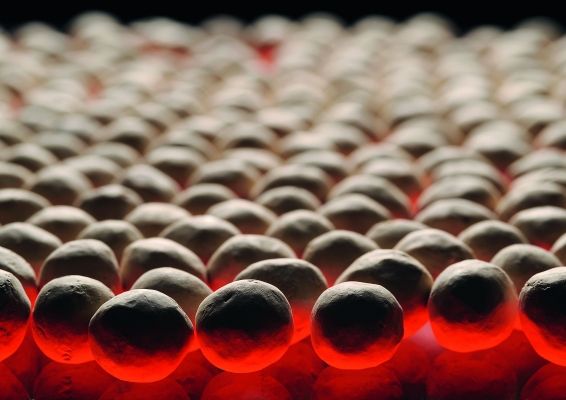 Heating accounts for roughly half of European energy consumption. Besides the need to keep buildings warm, industrial processing is the other major factor in heat consumption. To increase the efficiency of compressed air storage (discussed above), it is necessary to store the heat which is generated during the compression process, so that the heat can be used later during electricity generation. Thermal storage is also vital at solar thermal power stations which use concave mirrors to concentrate solar heat and generate steam for the turbines. With the stored heat, electricity can be generated even in the absence of sunlight (e.g. at night). Once again, the economic aspects are critical. 24/7 electricity generation is only cost effective and suitable for meeting basic demand if storage costs fall below €10 to €20 per kWh. Currently there are four basic ways of storing heat:

There is no single best thermal system for storing electricity. The storage systems have to be carefully selected and matched to the specific application. As it is normally most efficient to generate heat from primary energy, the development of thermal storage systems for industrial applications is largely still in its infancy. Sensible heat storage is currently the most widespread and practicable solution. Space heating in buildings is a good example. On this type of system, the temperature of the heat transfer medium (e.g. water) changes noticeably (i.e. can be observed) when heat is transferred in and out.

A technique developed by the German Aerospace Center (DLR) for storing solar radiation energy in low-cost solids is one of the latest developments. A 500 kWh demonstration plant is currently under construction in Stuttgart. The results of testing conducted at 400 °C are expected to be available by 2013. What sets Cellflux storage technology apart is its compatibility with different types of media including heat transfer oil, steam and molten salt, making it suitable for any type of solar thermal power station. The storage system is made up of individual modules (cells) and stores heat in the solid material. Inside the cells, a heat exchanger transfers the heat energy to a stream of air which flows through the solid storage material and transfers heat to it. The process is reversed to extract the heat. In contrast to storage systems in which molten salt must be kept at 230 °C to prevent crystallization, solid storage systems can be operated at lower temperatures. The capital investment costs are also lower.

In contrast to sensible heat storage systems, the temperature of latent heat storage systems remains essentially constant as they capture or release heat. Everyone knows that ice cubes can be used to keep beverages cool. With enough ice, the temperature inside the glass remains at a constant 0 °C until all of the ice has melted. Latent heat storage systems have a much higher energy density. The amount of energy which melts the ice could heat an equivalent amount of water from 0 to 80 °C. Because of this effect coupled with the fact that these systems can be operated at much lower temperature differentials, latent energy storage appears to have great potential in industrial applications.

Air-conditioning is a good example of latent energy storage. Construction materials for cooling buildings during the day and heating them at night have been developed in recent years. A team or researchers at the Fraunhofer Institute for Solar Energy Systems (ISE) and chemical company BASF have developed a process for enclosing paraffin wax droplets, which act as Phase Change Mate-rial (PCM), inside of hollow spheres made of acrylic glass. The spheres can then be mixed into mortar or plaster.

Other substances in addition to paraffin wax such as salt hydrates and salt mixtures (e.g. potassium and sodium nitrate) are also suitable for latent energy storage. Thermal transfer, however, remains the major obstacle standing in the way of this very promising technology. The thermal transfer coefficient depends on the thermal conductivity of the solid storage material, which is normally quite low for organic and inorganic solids. As a result, researchers are attempting to increase thermal conductivity and the thermal exchange surface area. In addition to micro-encapsulation in construction materials (discussed above), development teams working on industrial thermal storage systems are looking at macro-encapsulation of salt hydrate in graphite and enlargement of the thermal transfer surface area by designing steel and graphite fins into the latent energy storage systems. Another interesting approach is the use of PCM in heat transfer fluids to greatly increase capacity within a defined and limited temperature range. Sorption energy storage (SES) is based on the following effect: when gas molecules accumulate on certain surfaces (e.g. zeolithes), the heat of evaporation is released, and when the substance evaporates heat is removed from the surrounding environment.

Examples include self-cooling beer kegs and the cooling of beverages in earthenware. Equipment complexity has made this technology relatively expensive for industrial use. The primary emphasis of current research is the development of highly efficient sorption materials.

Chemical storage has the highest energy density of all thermal energy storage technologies. Heat is applied to a chemical compound to break it down into its constituent parts which are then stored separately. The thermal energy is recovered by allowing the chemical components to react, producing heat (exothermic reverse reaction). Gas-solid reactions are expected to offer the greatest potential due to the high storage densities and long storage duration. The list of possible reactions includes dehydration of salt hydrates or metal hydroxides (e.g. magnesium or copper sulfate hydrate or Mg-, Ca- or Ba(OH)2), decarboxylation of zinc, magnesium or calcium carbonates to metal oxides and deoxygenation of metal oxides (BaO2 or KO2), all of which are endothermic, reversible reactions which take place over a broad temperature range between 100 °C and 1,000 °C depending on the reaction. DLR is currently investigating thermochemical heat storage in the Federal Ministry of Economics and Technology‘s ‘CWS‘ project.

Summary: Renewables present a significant challenge for the electric power industry. Storage technologies will have a big role to play. At industrial companies which are able to utilize heat from the production process in CHP systems, thermal energy storage will make a major contribution to increased energy efficiency. The chemical industry holds the key to development of these technologies. A lot of attention will be focused on these issues at Achema 2012 and promising developments will be on display.