14.12.2017 The European Commission has ambitious goals in terms of energy usage. By 2030, greenhouse gas emissions are expected to fall by 40% compared to 1990, and energy efficiency will increase by 30%. In particular the energy-intensive chemical industry will make an important contribution here. But the industry is worried about the recent decision by the European Parliament’s Industry Committee, which is planning a new cap on absolute energy consumption in 2030. Time to take stock of recent achievements. 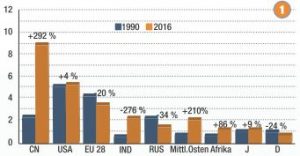 While CO2 emissions in the EU fell by 20% between 1990 and 2016, emissions increased in all other regions of the world. Picture: VCI

Change in Fuel and Power Consumption 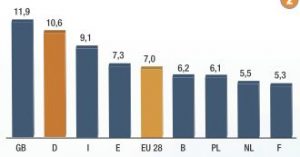 Within Europe, electricity prices are highest in the United Kingdom and Germany. Picture: VCI

There has also been a substantial change in fuel and power consumption by source. While between 1990 and 2015 use of solid fuels, namely coal, dropped by 59%, consumption of gas and petroleum products were also significantly lower (-34% and -29%). Astonishingly in the same time period use of renewable fuels also fell by almost 40% and consumption of electrical energy dropped by 14%. The efforts of Europe´s chemical industry in gaining ever greater energy efficiency are underlined by another interesting figure. From 1990 to 2015 consumption of derived heat rose by 25%. Compared to overall industry energy consumption in the EU, the chemical industry presents a very different picture. EU´s industry in general uses 25% less derived heat and 63% more renewable energies. All in all, in the EU emissions of greenhouse gases already fell by 18% between 1990 and 2012, and the share of renewable energy sources reached 14.1% in 2012. Energy efficiency is likely to increase by 18-19% by 2020. This is close to the European Commission´s target of 20%.

EU chemicals energy intensity has been slashed in half during 24 year period. Picture: Cefic

In view of these facts chemical associations like the German VCI think that the Industry Committee of the European Parliament is setting the wrong political course. “The planned new upper limit for the absolute energy consumption in the year 2030 ignores the central role of the production factor energy for the industry”, states the VCI in a recent press release. They argue that the chemical industry does not simply consume energy, but uses it to produce valuable products.

By cutting off absolute energy consumption, the European Union limits production in sectors such as chemicals and restricts opportunities for growth. By tightening the absolute energy-saving target, the EU is taking the risk that energy saving chemical products may no longer be completely manufactured in Europe in the future.