Uncertainty on Both Sides of the Channel

Brexit and the Chemical Industry

The knock-on effects of the British Exit form the European Union are felt around the world. Chemical industry in EU and Great Britain will have to readjust their relations in several aspects. The severity of the impact will ultimately depend on the outcome of political negotiations. But some consequences are already apparent.

The UK’s decision to exit the European Union creates significant uncertainty for companies and their employees. Picture: Pixelbliss – Fotolia

Production and sales of chemicals in the EU is a growing business. In 20 years EU chemicals sales increased by nearly 60% to a volume of 519 billion Euros in 2015. No fewer than 1.2 million European jobs are related to the chemical industry. The UK chemical industry represents about 7% of total EU-28 sales. While exports to the UK reached €22.6 billion in 2016, imports from the UK totalled €19.3 billion. In 2016, the German chemial industry alone sold products worth nearly €12 billion to the UK (6.7% of German chemical exports) and imported goods for more than 6.4 billion euros (5.2%). Exports to the UK have risen sharply over the past five years. The numbers make it clear: there is a lot at stake. The UK’s decision to exit the European Union has created significant uncertainty for companies and their employees.

The chemical industry and its suppliers and customers are part of highly integrated European and global industry value chains, with complex supply chains often crossing borders on many occasions, both inside the EU and across the external EU border. Chemicals may cross the borders several times, either in the form of final chemical products or integrated into (intermediate) products made with chemicals (e.g. car parts). “Even in the case of the most advanced trade agreement, customs procedures will be much more complex and costly than in the single market of today”, says the European Chemical Industry Council cefic which fears that placing additional burdens on supply chains will increase production costs, impact negatively on consumers and cause disruption that will put jobs of industrial workers at risk. 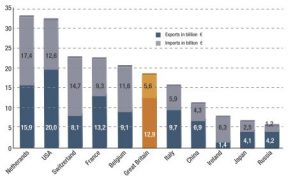 Whatever form trade and investment relations between the UK and the EU may take, it will almost ceartainly fall short of the current single market. Failure to secure a transitional period and a new UK-EU trade agreement would see the UK fall back on WTO Most Favoured Nation (MFN) status. This would mean the reintroduction of import duties on chemicals trade between the EU and the UK. Assuming the UK would take on the same WTO commitments as the EU, this would mean a maximum tariff level of 5.5% or 6.5% on chemicals trade, amounting to roughly €40 billion annually. An average import duty of 3–4% would result in about €1.5 billion additional input costs for the chemical industry per year. The German chemical association VCI estimates that annual tariff payments of €200 million are possible, should the British government introduce chemical and pharmaceutical tariffs at the level of the EU´s existing external tariffs. And these are just the minimal consequences.

Greater Burdens for Future Chemicals Legislation in Europe and UK

Even greater burdens can be expected if specific regulation – e.g. the chemicals legislation Reach (registration, evaluation, authorisation and restrictions of chemicals) – or the authorisation of plant protectants and biocides develops in different directions in the future. Three major scenarios are possible:

However, any of these scenarios will come at a cost for the chemical industry. Therefore chemical associations like cefic (Europe), vci (Germany) or CIA (UK) are strongly in favour of a comprehensive agreement that links the UK as closely as possible to the EU.

Brexit could cut not only foreign direct investment inflows into the UK from Europe or third countries, but could also make Europe altogether a less attractive place to invest. While other regions in the world have targeted industrial policy strategies that aim to develop their chemical and manufacturing industry more generally, Brexit will negatively influence investment in Europe and in the UK. For example in 2015 the level of direct investments of the German chemical industry in the UK amounted to around €1 billion. German chemical companies have 40 subsidiaries in the UK with around 8,000 employees. By contrast, Germany has more than €2.6 billion direct investments from British chemical companies.

Conclusion: The UK´s exit from the EU without a new trade agreement in place would be the worst possible outcome for the chemical industry in both the UK and the EU.