How large must the distance to major hazard plants be? This question is currently causing industrial park operators and planners serious headaches. Because even the latest draft of the new German Major Accident Ordinance still fails to clarify this point.

Even the latest draft of the German Major Accident Ordinance still fails to clarify the question, how large the distance to a major hazard plant has to be. (Bild: Tom Bayer and alphaspirit – Fotolia)

The German legislature is currently revising national major incident law as a matter of urgency because the deadline for transposition of the Seveso III Directive into German law expired as long ago as 31.05.2015.  Introduction of the GHS (global harmonized system) for the classification of hazardous substances, which was put into effect on 01.06.2015 by CLP Regulation (EC) No. 1272/2008, has necessitated new major incident legislation. Article 13 Section 2 of the Seveso III Directive, like Article 12 of the preceding Directive 96/82/EC, demands an appropriate distance between major hazard plants on the one hand and certain  land uses worthy of protection on the other hand. The uses deemed to be worthy of protection are residential areas, publicly used buildings and areas, and – wherever possible – also major traffic routes.

Regrettably, even in the latest draft of the new Major Accident Ordinance of 17.08.2016, the regulator has failed to give any indication of  how the appropriate distance is to be calculated and under what circumstances the actual distance may be shortened, in spite of introducing many new procedural rules. It is proposed to settle this matter at a later date on publication of a set of  “Technical Instructions on Distance”. At least for the interim period prior to adoption of the Technical Instructions on Distance, for which no draft has yet been prepared, this area of law will cause considerable legal uncertainties. In practice, recourse is often taken to the guidelines of the German Commission on Process Safety (Kommission für Anlagensicherheit, KAS) (KAS-18  and KAS-33), which, however, have no substantial legal status. They are perceived as anticipated expert opinions and can thus be rebutted in a specific case. 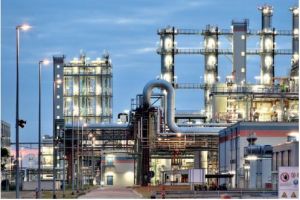 If the appropriate safety margin between the operating area and the object to be protected is undershot by the new construction or substantial modification of an installation, an approval procedure with public participation has to be carried out. Picture: Industrieblick – Fotolia

Distance Requirements According to Case Law

Guidelines for enforcing this law came from the European Court of Justice (ECJ) and the  Federal German Administrative Court  in 2011 and 2012. In a judgement of 15.09.2011 in the Mücksch case (Case C-53/10), the ECJ had to inform German law enforcement that the topic of consultation distances by no means concerns only land-use planning, in contrast to what had been previously assumed. In Germany the then valid EU regulation was enforced solely through the planning regulations of Section  50 of the Federal German Immission Control Act (BImSchG). This lays down the separation principle important for land-use planning which disallows residential areas in the immediate vicinity of industrial and commercial sites. However, the ECJ considered that to be insufficient for implementation of the Seveso II Directive because the topic of the appropriate distance also arises in each individual approval process.

This affects both the approval procedures for major hazard plants themselves, and also the approval procedures for neighbouring projects  considered worthy of protection. It is immaterial whether the approval concerned is to be granted in a procedure conducted under pollution-control law or in a building permit application procedure. This means that the building authorities, which have to decide in cases of projects located  in areas influenced by major hazard plants, may have to address the topic of major incidents. However, they have been unable to gain any experience in these matters in the past because major-incident law has hitherto been of concern only to pollution control and planning authorities. Many case handlers working for the building authorities are therefore simply overtaxed when having to deal with this topic. Meanwhile, however, a platform has been set up in Germany where both project developers and approval authorities  can seek expert advice (www.störfallexperten.de).

Consideration of necessary distances does not lead to the inadmissibility of all development projects for which the actual distances lie below certain values. The ECJ permits member states to take account of additional factors and to approve development projects located relatively close to major-hazard plants in specific individual cases. Nor does any strict impairment prohibition apply. According to the Directive, the “appropriate distances” are to be maintained “on a long-term basis”, and not to be understood as strict approval requirements. However, the approval authorities are required to afford this due consideration during the approval procedure and to arrive at a justifiable minimum distance on consideration of all individual factors. The ECJ expressly permits consideration of “socio-economic factors” without specifying further details. Thus the economic significance of the investment or the creation and safeguarding of jobs could be arguments for smaller distances between major hazard plants and land uses deserving protection.

In its judgement of 20.12.2012 (4 C 11.11), the Federal Administrative Court set out additional relevant details and above all decided  that the approval authority has no power of discretion in determining the appropriate distance because this is a completely verifiable application of the law. What is required is a comprehending weighing-up of major accident issues and issues not related to major accidents,  particularly those of a social, ecological, and economic nature (“socio-economic factors”).

Consequences for the Approval Process  in and Adjacent to Industrial Parks

According to this case law, a directive-compliant interpretation of the entire body of approval law is now required.  Within the area of influence of major hazard plants the topic of distance has to be considered independently of whether the project lies within the inner or the  outer zone or in the area to be developed. Existing development plants have to be appropriately modified. Above all, older development plans which were drawn up without any consideration of this topic regularly show no distances which have to be observed; this has to be rectified to make them directive-compliant.

The distance topic also plays a role in all emission-related approval procedures wherever IED plants are involved, because the admissibility of a project according to planning law is one of the decisive questions in these procedures.

However, a restriction should be pointed out here: In so far as the planned project is a major-hazard plant, the measures to be taken to prevent major incidents and to limit the effects of any major incident that may nevertheless occur are determined solely by the provisions of the Major Accident Ordinance. No additional consideration of distance case law from the ECJ is then required. These requirements will, however, be greater and more stringent when the distance is less than the consultation distance according to KAS-18 than when the distance classes  required by that guideline are observed.

If the actual distance is less than the appropriate safety distance between the site of the plant and the object to be protected because a new plant has been built or an existing one significantly modified, then an approval process with public participation will always be required in the future. This is, in fact, already the case because the corresponding regulations of the Seveso III Directive apply directly because they have not yet been transposed into German national law. This automatically increases the possibility of legal recourse by affected residents and recognised environmental organisations. Therefore it will probably become increasingly difficult to successfully implement such plans. Even after successful conclusion of the approval process there is always the possibility of a judicial review of such decisions. And the situation is also becoming more difficult for existing plants because existing rights are not safeguarded when it comes to compliance with the above criteria. This has been met with vehement criticism on the part of industry.

With regard to the consultation distance problem, even the latest draft of the new Major Accident Ordinance contains no rules about how the appropriate distance is to be calculated and under what conditions a lesser distance may be approved.

If the actual distance is less than the appropriate safety distance between the area of the plant and the object to be protected because a new plant has been built or an existing one significantly modified, then an approval process with public participation will always be required in the future.