Future of Switzerland as Location for the Chemical Industry

“The chemical industry is dead …”. This was the provocative first sentence of an invitation issued by organisations located in the area of Basel, Switzerland, to attend a business event entitled “Chemical Industry: Opportunities in the Basel Area” which took place on September 1, 2016.

The background story was the evolution of Infrapark Baselland from a production site of the Clariant company, via foundation of Infrapark in 2011, into a site now accommodating 15 different companies. The following questions took centre stage at this event:
What are the key factors for a successful transformation of a single company’s production site into a chemical park accommodating many companies?
Which criteria influence the decision of companies to set up operations in such an environment – or to remain there?
Which topics are important for ensuring sustained success?

The invitation came from Basel-Area Swiss/I-Net together with the Baselland Economic Development Office, Baselland Economic Chamber, and Infrapark Baselland. And the statement “… is dead …” really did provoke the speakers to demonstrate that the chemical industry in the Basel area is not only very much alive but has also undergone some very positive transformations. Over 90 people attended the event to hear a variety of speakers report about the changes that have been taking place in the chemical industry of the Basel area. Above all, the tempestuous changes of recent years, such as globalisation or relocation of jobs, have posed huge challenges for the chemical industry – but also offer opportunities.

After Thomas Weber, Councillor of Baselland Canton, had welcomed the audience, Dr. Ulrich Ott, Head of Clariant Europa, extolled the virtues of the chemical park model, both for the research-driven chemical industry and particularly for chemical production, on the basis of experience gained with chemical parks located in Germany: Companies can focus on their core competencies and rely on a single provider for their energy and media supplies, as well as services such as analyses, waste disposal, emergency services, workshops, engineering, logistics, all the way to support in the areas of occupational health and safety, security, environmental protection. Ott also drew attention to the third wave of chemical park development which is currently gathering momentum in Germany: The chemical park as an incubator for start-up companies.

Speakers representing three of the companies located at Infrapark Baselland subsequently outlined the advantages resulting for their enter-prises from cooperation with the Muttenz-based chemical park: Dr. Albrecht Metzger, Head of Development and Analysis at Bayer Crop-science Schweiz, spoke about the successful expansion of the production facilities of Bayer Cropscience in the Infrapark: Over CHF 100m has been invested in this expansion in the course of eight years and the number of employees has increased threefold, with the result that Muttenz has become one of Bayer Cropscience’s three most important production sites. Not only the various services provided by Infrapark in support of this development but also the pragmatic, proactive approach adopted by the authorities of the Canton of Basellandschaft facilitated rapid implementation of this expansion – an important reason for Bayer’s decision to expand at this site.

Smart distribution and conditioning of chemicals is the core business of the Brenntag company. Dr. Thomas Heinrich, Head of Brenntag Schweizerhall, explained that Brenntag’s “Connecting Chemistry” philosophy could be optimally implemented within Infrapark:  At Mut-tenz, the world’s first site to implement such a concept, chemicals are conditioned and then distributed directly to on-site users by pipelines routed via existing pipeline bridges. This simplifies logistics for tenants, reduces heavy goods vehicle traffic, increases safety, and thus also fulfils the goals of Brenntag’s sustainability strategy.

Infrapark is also an ideal location for start-up companies. AVA Biochem BSL has developed and patented processes permitting production of so-called platform chemicals from biomass, which can be used for the production of renewable plastics (such as polyethylene furanoate, PEF, for bottles). Dr. Thomas M. Kläusli, Head of Marketing at AVA Biochem, reported that 20 tonnes of 5-hydroxymethylfurfural (5-HMF) is produced per year at AVA Biochem’s Infrapark facility. The pilot plant at Muttenz serves as a prototype for planned industrial scale production. According to Kläusli, prompt, goal-oriented support provided by Infrapark is of great importance for a start-up company. A “tender seedling” such as a start-up can only flourish on such “fertile ground”.

Renaud Spitz, Head of Infrapark Baselland and Country Head of Clariant Switzerland, looked back to 2010, when Clariant first developed the idea of transforming the Muttenz site into a chemical park. Six years later 15 companies are now operating at Infrapark and business is developing extremely well. In addition to the site advantages mentioned by Spitz and efforts to constantly improve services at Infrapark, excellent cooperation with Baselland Economic Development Office and Basel-Area Swiss has made a significant contribution to positive development of Infrapark. Spitz concluded his talk by launching into an ambitious vision of an expanded Infrapark chemical park covering the entire area of Schweizerhalle. Owing to the advantages offered by “economy of scale” all chemical companies, including other chemical and pharmaceutical companies in the vicinity of Infrapark, would benefit from such an expansion of the infrastructure service provider. Finally, Thomas Kübler, Head of Baselland Economic Promotion, underlined the huge importance of the chemical industry for economic development of the region and assured listeners that the Canton of Basellandschaft is therefore intent upon providing ideal conditions for this industry to operate. And when he speaks of the chemical industry, he also means the pharmaceutical industry – the life science sector also produces chemical substances, although there is a tendency to speak of two different industries. As became abundantly clear to partici-pants at the event: The chemical industry in the Basel area is very much alive. 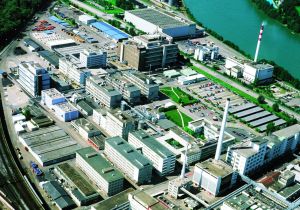 Infrapark Baselland is a location for industrial companies, especially in the chemical and life sciences industry. The industrial park covers all aspects from research and development to production. Located in the trinational region of Basel, the location provides comprehensive services and a well developed area of 37 hectares. With its services and available space, the Infrapark is unique in the “Dreiländereck” Switzerland-Germany-France.